Evolution? Revolution? When the third generation of the Volkswagen Transporter made its debut in May 1979, nobody could say for sure. At first sight, the new T3 differs clearly from the rounded design of its predecessors and looks to the future with a contemporary clear edge. The drive concept, on the other hand, is very traditional: as with the T2, there are only two air-cooled boxer engines to choose from, which are installed in the back and drive the rear axle. Is this the right way? After all, the T3 has to fill big footsteps in 1979 as more than five million Type 2s have been built since 1950. Forty years later, we know that the third Transporter generation has not only continued this success story, but has also won many new fans for Volkswagen. 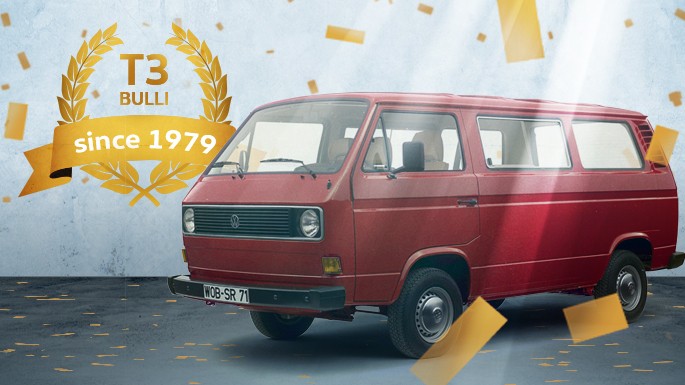 No wonder, because the T3 has always been and still is a real all-rounder: craftsmen and other professionals rely on Pick-Up, Double Cab and Panel Van. Families love the comfortable Volkswagen Passenger Range of Bus, Caravelle and Multivan. Joker, California and Atlantic inspire campers all over the world. Adventurers will be delighted by the extreme all-terrain talents of the T3 syncro with all-wheel drive. But 4x4 is not the only technical delicacy to refine the T3 concept: over the course of thirteen years of construction, water boxer, diesel and turbo diesel engines, ABS and catalytic converter technology make their way into the Type 2 series. Special editions such as Caravelle "Ton in Ton", Coach, Multivan Magnum, Blue Star, White Star, Red Star and Limited Last Edition stimulate demand and soon develop into collector's items.

When production came to an end in 1992, the last Volkswagen T3s were already advertised as "true classics". The successor, the T4, has already been on the market for almost two years at that time! While it reinterprets the classic Type 2 concept, the T3 marks the end of the era of boxer engine and rear-wheel drive at Volkswagen, at least in Europe. Perhaps this is why the T3 is today one of the most popular and coveted Volkswagen classics. Even after 40 years, it is by no means a thing of the past!

Only the best for the anniversary: The T3 COLLECTOR'S EDITION for its 40th birthday.

Of course there are also many T3 fans at Volkswagen Classic Parts. Thanks to their efforts we have been able to reproduce many T3 spare parts within the last years - from the ignition key to various body parts. In the course of our research we also found, for example, the original toolings of some tailgate emblems. Couldn't we realize anything really crazy with it...? That's how the idea was born to create an exclusive special edition for T3 enthusiasts.

We present the result of our crazy idea as a limited collector's edition for the 40th anniversary: golden T3 emblems with certificate in a noble box! 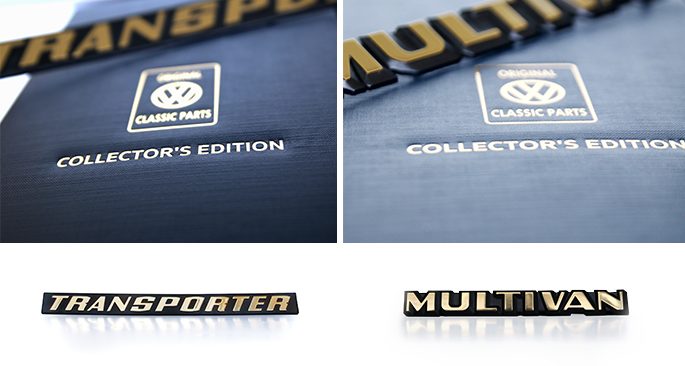 Our top reproduced parts for the T3

Within the last years, we have reintroduced dozens of parts for the T3 - from the ignition key to large body parts. All in Genuine Volkswagen quality, of course. Browse through the highlights of our T3 reproductions: