About 25 years ago, the family van was born at Volkswagen: In the Portuguese town of Palmela, Volkswagen, Seat and Ford introduced their ‘triplets’ to the world. Almost identical both visually and technically, the trio grabbed everyone’s attention. Their names? Ford Galaxy, Seat Alhambra and Volkswagen Sharan. 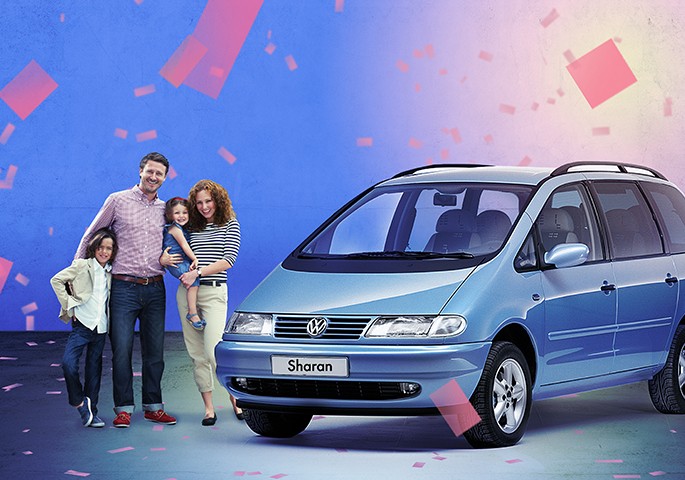 Ford and Volkswagen - a temporary marriage.
The Volkswagen group and Ford founded AUTOEUROPA to build the new family of vehicles. The Portuguese factory belonged to both global players equally, with the aim of keeping the costs and risks of the van project to a minimum. Volkswagen was responsible for the technical development and Ford for production. A plan in action: From now on, Volkswagen, Seat and Ford would produce similarly designed ‘sisters’, which only differed in details such as the headlights, rear lights and radiator grills. Over time, however, they began more and more to go separate ways underlining the differences between the three vans e.g. by  a design that was more similar to their automobile families. So, in spring 2000, the Sharan was given an extensive facelift: with clear glass headlights, new bumpers, rear lights and a new premium interior it became more reminiscent of the Polo, Golf and Passat than the Ford Galaxy. Model year 2004 saw further development and the Sharan was upgraded once again with new rear lights, side indicators in the mirrors and chrome on the radiator grill and trims, among other things.

The Sharan - now a ‘millionaire’.
While production stopped on the first generation Galaxy in 2006, the Sharan Mk1 remained in the range until 2010 - and so with almost 15 years, it is one of the Volkswagen models with the longest production time. Ford gave up its share of the joint subsidiary to Volkswagen in 1999 already. Today, after 25 years, Volkswagen continues to produce vehicles in Palmela: this includes the Volkswagen T-Roc and the current generation of Volkswagen Sharan and Seat Alhambra. In fact, the Sharan has even become a millionaire: on 10th April 2019, the millionth model rolled off the line in Portugal.

The car for families.
In 1995, the Sharan stood out thanks to its multi-functional space design. Whether fully seated with seven or just two front seats, almost any space requirements can be satisfied - without having to compromise on comfort. The interior can be restyled into a small living room with just a few manual adjustments: by folding down the middle seat, the front seats can be turned 180 degrees to the back, making breaks at rest stops and in car parks a relaxing and, above all, shared experience. The optionally integrated children’s seats also reflect how Volkswagen conceived this car primarily for families. With two extension stages, children aged between nine months and ten years can be easily transported. No wonder that in the end of the 1990s over 70% of Sharan owners were parents with children.