Open to rays of hope: the Golf Mk3 Cabrio.

Timeless looks, reliable technology, but above all a place in the sun for up to four people: with the same recipe for success as its predecessors, the Golf Mk3 Cabrio was launched in 1993. And like the Beetle and Golf Mk1 Cabrio, it rolled off the assembly line at Karmann in Osnabrück. With this tradition behind it, its path to becoming a classic is predetermined, at least that's what we at Volkswagen Classic Parts think – and we will give you five good reasons for this. 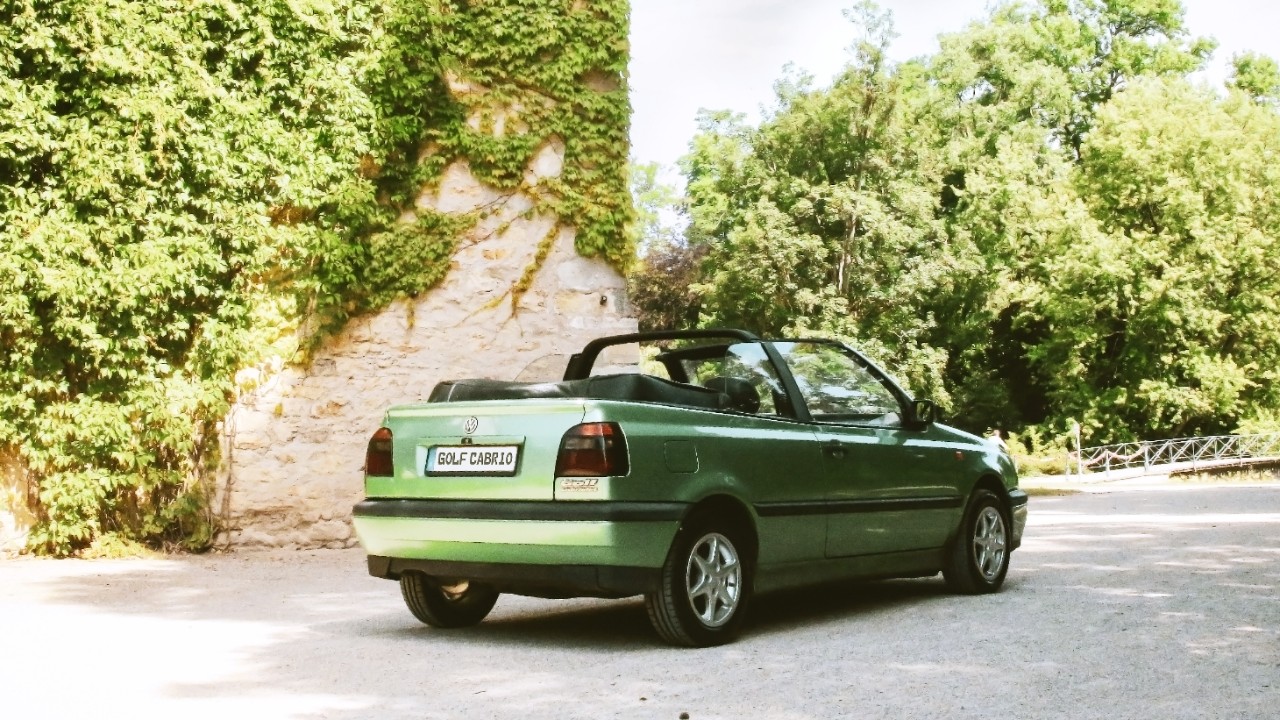 Of course, convertibles have an easier time maturing into classic cars: as a rule, they are already a collector's item, rather than a commodity, are usually used less in winter and arouse more desire as modern classics than their enclosed siblings. The Golf Mk3 Cabrio is no exception, but is still surprisingly affordable almost 30 years after its première. One reason for this is certainly the high number of units, because by 1998 around 171,000 units had rolled off the production line in Osnabrück. It was an obvious success, as both of its predecessors went down in history as "world champions": for a long time, the open Beetle was the most-built convertible in the world with 331,847 units: it was later surpassed by the "strawberry basket" based on the Golf Mk1 with 388,525 units manufactured. Volkswagen convertibles have always been open to everyone.

The Golf Mk3 Cabrio is unmistakably a child of the nineties, but its styling still knows how to please today. The side view is characterised by the window line rising to the rear more strongly than in the saloon and its massive door sills. The roll bar (which was still very controversial in its predecessor) is tilted backwards slightly. Frameless, fully retractable side windows provide even more fresh air if required. At the rear, a discreet spoiler lip skilfully continues the lateral window line. When equipped with 14-inch wheels and at least partially painted bumpers in its basic form, the Golf Mk3 Cabrio looks both sporty and elegant. Especially with the light-coloured (leather) interior and the soft top open, the feeling of space seems generous, while the fabric upholstery, with its contemporary 90's design, also has something going for it. This means that the open air Golf cuts a fine figure both open and closed. The convertible might even be the most visually attractive Golf Mk3 of all.

The Golf Mk3 Cabrio appears as solidly built as usual. The roll bar that we have already mentioned, in combination with reinforced door sills and a cross member behind the dashboard, ensures a high level of body stiffness. The safety equipment, including ABS and two air bags, side impact protection and belt pre-tensioners ex works, made the open Golf the benchmark in its class in the 1990's. The six-layer soft top (opened electro-hydraulically at the push of a button for an extra charge) is suitable for winter and car wash systems, is easy to operate and can be folded much flatter than on the Golf Mk1 Convertible. The boot was also enlarged to a volume of 270 litres and can also be expanded to 448 litres thanks to the fold-down backrest. Despite all of these optimisations, the open Golf Mk3 weighs only about 100 kg more than its predecessor.

The relatively low curb weight of about 1,200 kg and the improved aerodynamics (Cd value of 0.38 instead of 0.48 for the Golf Mk1 Convertible) generally guarantee brisk progress in the open Golf Mk3. The basic engine with 55 kW (75 hp) already reaches a top speed of 160 km/h and is always sufficient for leisurely cruising. More fun are the 1.8 litre engine with 66 kW (90 hp) or the 1.6 litre with 74 kW (100 hp), which are also available with an automatic transmission. Introduced in 1995, the TDI engines with 66 kW (90 hp) or even 81 kW (110 hp) are not only extremely economical, but are also extremely powerful with 202 or 235 Nm maximum torque. The top engine is the 2-litre petrol engine with 85 kW (115 hp), which was familiar from the GTI, which accelerates the convertible to 190 km/h. Common to all engines is a high level of reliability; Over 200,000 km of mileage is not uncommon, especially in the Golf Mk3 Cabrios. So it is not such a pity that the even more powerful 16V or even VR6 engines were, unfortunately, not available ex works for the open Golf.

When it comes to attractive promotional models, the Golf Mk1 Cabrio set the bar pretty high. But the Golf Mk3 also has a lot to offer here: the "Pink Floyd" (1994), "Rolling Stones Collection" (1995), "Bon Jovi" (1996) and "Joker" (1997) are also available as sedans and estates. For the convertible, however, the range of equipment was supplemented by other delicacies, such as BBS aluminium rims or full-surface painted bumpers. From today's point of view, however, it is the special models that were offered exclusively as convertibles that are really exciting.
It all began at the end of 1994 with the "Christmas Cabrio" with pearl effect paint in dragon green or black magic, a beaver-coloured pure leather interior and a black fabric top. BBS rims in 6 J x 15", central locking, electric exterior mirrors, heated front seats, electric windows and the beta radio system are also on board.
All this is also offered by the Golf Cabrio "Highline", which was followed in 1995 by further features: a paint finish in purple violet or black magic pearl effect or satin silver metallic, plus a leather interior in either blackberry or black, matching textile floor mats, a wooden gear knob and "BBS-Solitude" alloy rims in a 6 J x 15" format.
The 1996 "Classic Edition" is just as opulently equipped, but is only available in the pearl-effect aqua blue, Bordeaux, classic green or black magic paint finishes and stands on polished "Solitude" alloy rims. Nappa leather in light beige, Mauritius blue or black is available as an interior; the fabric soft top opens electro-hydraulically as standard, while sound is provided by the gamma radio system with a digital sound package.
The "auto motor und sport Edition" from 1996 is probably the rarest Golf Mk3 Cabrio. Only 50 flash-red copies were produced for the 50th birthday of the well-known car magazine, recognisable by a numbered badge in front of the gear lever and a special interior: red leather with white "auto motor und sport" logos on the seat backrests, plus the steering wheel rim, gear knob and cuff are made from black leather with red stitching.
In 1997 the "Sport Edition" heralds the end of production of the Golf Mk3 Cabrio: six colours were available, including the two exclusive paint finishes tropic-orange metallic and Technoblau pearl effect. An interior in black-orange or black-blue fabric is available. The steering wheel rim, gear knob and cuff are made from leather with matching stitching. A wind deflector and the beta radio system – among other amenities – were standard here. Externally, the large front spoiler and alloy wheels in the "BBS-RS2 design" set the look; at 6.5 J x 16", they reached a size that would otherwise be reserved for the GTI.
Last but not least, the Golf Cabrio "Colour Concept" should be mentioned, although strictly speaking this is not a special model. Rather, these were particularly colourful equipment packages with gaudy exterior paint and a suitably coloured leather interior. From 1995, yellow, jazz blue pearl effect, black magic pearl effect, flash red and salsa green were available. In the contemporary street-scape, no standard Golf Mk3 Cabrio caught the eye as much as a "Colour Concept" – then, as now, they were a matter of taste. Speaking of taste: there should be the right Golf Mk3 Cabrio for everyone somewhere among the numerous special models, if you would not prefer a "normal" version, that is.

In all honesty: it is an upcoming classic

With a construction period of almost five years, the Golf Mk3 Cabrio does not come close to its predecessors the Beetle (31 years from 1949 to 1980) and the Golf Mk1 Cabrio (14 years from 1979 to 1993). Nevertheless, more than 200,000 units were manufactured – including the Golf 4 Cabrio from 1998 to 2002, which relies on the same technical basis. Many of them are still in top form 20 years after the end of their production. Nevertheless, the Golf Mk3 Cabrio is one of the cheapest open-top modern classics on the market and therefore (still) an insider tip. Even less well-preserved examples can often be rescued with a manageable amount of effort and transformed into a classic suitable for everyday use. We at Volkswagen Classic Parts can supply the right spare parts to do so. We even have particularly sought-after parts, such as the front fenders that have been re-manufactured with original tools – so that the Golf Mk3 Cabrio will not be a thing of the past tomorrow.

Discover now: our complete range for the Golf Mk3 Cabrio