Passat with power: spare parts for the R36.

The R36 – a Passat like no other before or after it. Its centrepiece: obviously the 3.6 litre six-cylinder with a terrific sound! But it is only the unique overall package that makes the Passat 3C R36 the classic of tomorrow. Of course, Volkswagen Classic Parts is already taking care of its spare parts supply today. 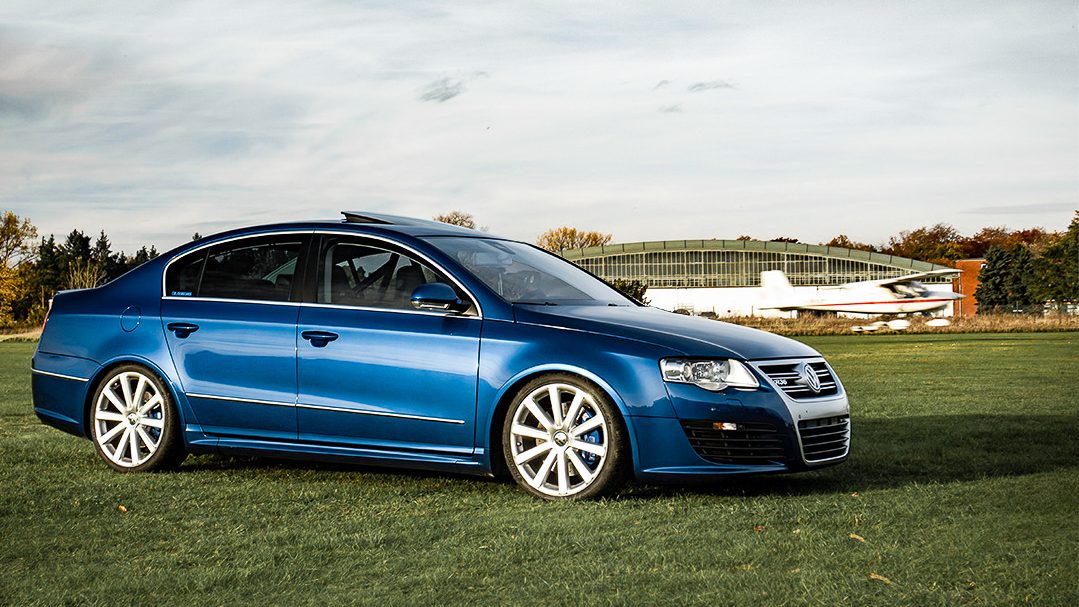 A touring saloon, family estate car or a business vehicle – that's what the Volkswagen Passat has been for almost 50 years. But it can also be different: R36 is the abbreviation under which the Passat 3C mutated into a real competitive athlete. Its six-cylinder engine without a turbo(!) draws a whopping 300 hp and 350 Nm of torque from a displacement of 3.6 litres. Its 4MOTION all-wheel drive and a DSG transmission catapult the R36 from 0 to 100 km/h in 5.6 seconds (sedan) and 5.8 seconds (estate) respectively. At its première at the end of 2006 it was the most powerful and fastest Passat of all time. And it remained so until it disappeared from the price lists again in 2010

In addition to the technology, the dynamic look also makes the Passat R36 unmistakable: bumpers with special aprons and wheel arch and sill extensions make it appear beefier. The radiator grille in matt chrome bears a discreet R36 emblem. At the rear, darkened tail lights, a spoiler and the double exhaust with chrome-plated tailpipes add sporty accents. Sports suspension with 25 mm lowering and the 8 J x 18" large "Omanyt" alloy wheels with 235/40 tyres ensure the best contact with the road. Another exclusive detail of the R36: the blue painted brake callipers front and rear.

Of course, attention to detail does not stop at the interior: the "performance" sports seats at the front and rear with "Monte Carlo" fabric covers have R36 emblems in the backrests. The R36 logo can also be found on the door entry strips and the sports steering wheel. The pedals and footrest are made of brushed stainless steel, while the decorative inserts on the control panel and centre console are housed in "dark brushed aluminium".

Volkswagen also offered the 3.6 litre engine in the successor model, but as an equipment line, the Passat R36 was already history after about three years. No wonder that it has long been regarded as an upcoming classic not only by fans. At Volkswagen Classic Parts, we have recognised the signs of the times. We are already committed to a reliable supply of parts for this modern classic. We have recently added the first new productions for the R36 to our product range – so that the once most powerful Passat will not be yesterday's car tomorrow.

The "R36" lettering
The striking R36 emblem for mounting on the tailgate of the estate car or on the boot lid of the sedan. The original manufacturer has started up the machines again exclusively for us. Because only the logo makes the R36 complete!

The "R36" door sills
They remind you as soon as you get in that you are taking a seat in a very special Passat: the anti-slip films for the sill (front with R36 lettering). Due to years of getting in and out, many specimens have suffered from unsightly signs of use. With our new production, the sporty-noble look from the new car is now returning.

Discover now: our complete range for your Passat 3C

Click through the appropriate Original Volkswagen Classic Parts for your model: the vehicle identification number makes searching for parts for modern classics from 1998 onwards child's play. Based on the data we have stored, the spare parts that are right for your vehicle are displayed automatically. Try it out now and find spare parts for your Volkswagen: